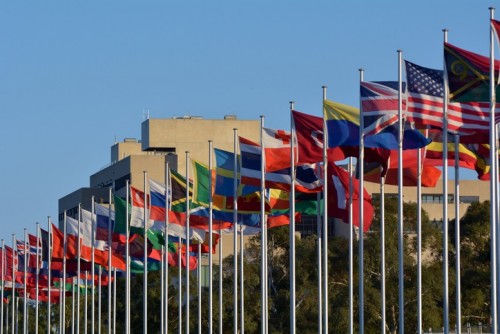 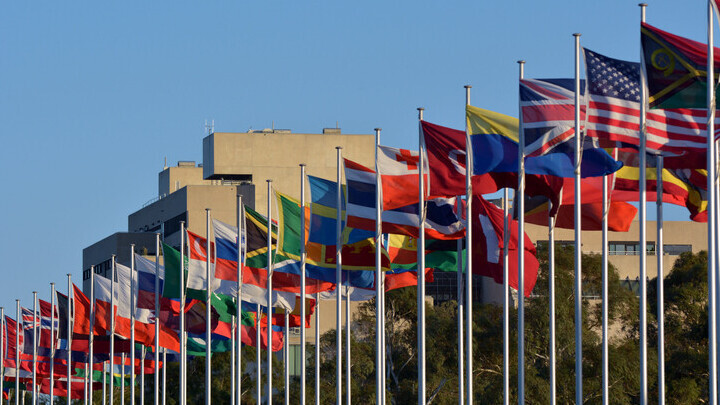 It's an area of land which has borders (or a coast), a head of state and a government. There are 195 of them in the world.

What does it mean to be British? To be American? To be French? Are British people inherently different from people born outside the UK? How is someone who was born or lives on one side of the road on the border between Northern Ireland and the Republic of Ireland, or between France and Germany, or between the United States and Mexico, different from someone who was born or lives on the other side? Why should I be expected to share an identity with someone who lives inside some lines on a map, and not with someone who lives outside those lines? Aren't we all human?

According to the political theorist Benedict Anderson, a nation is an 'imagined community'. That is, it exists only in people's minds. And yet, there are things which people of a shared nationality are likely to have in common. Language; food; landscape; climate; how society is structured, how people behave; a system of government.

Then again, they could easily share any or all of those things with people of other nationalities. English is spoken in over 50 countries around the world; Indian food is not confined to India; democracy is practised by dozens of countries, and aspired to by many more; there is arguably such a thing as 'a Mediterranean identity', or 'an Arab identity', which incorporates many nations. Moreover, large countries such as the United States or China contain within them a wide variety of landscape and climate. Winter in Alaska is a very different experience from winter in Alabama; China is home to both Mount Everest and tropical plains. Some countries include a variety of languages and identities: official business in Switzerland is conducted in German, French and Italian. The powers of national governments are often dissipated by transnational bodies such as the European Union - arguably even more so by the power of transnational corporations.

Nations do exist, though, and not just in people's minds. No matter how deeply you believe that we all share one humanity and that divisions between us are artificial, nations are, at the very least, convenient and necessary administrative divisions.

It isn't enough, either, to dismiss nations because they exist only in people's imaginations. The imagination is a powerful force, and there is a strong emotional component to the way people see nations. Why do some people tear up (and / or stand up) at the sound of the National Anthem? Why do they treat a flag as a kind of sacred object to be treated with reverence, rather than just a piece of coloured cloth? For some people, their nation is like their family, an essential part of their identity and a way of understanding themselves. They feel it should be defended and protected as they would defend and protect their own family. Others fear the whole idea of nationhood, perhaps because they feel excluded from the nation in which they live, or because they feel threatened by other nations, or because they have seen the consequences, in war and division, of excessive national loyalty.

This brings us to three key words for understanding nations and how people feel about them: patriotism, nationalism and internationalism. What do they mean?

If you love your nation, you are a patriot. If you hate or fear nations which are not yours, you are a nationalist. If you believe that our first loyalty is to humanity as a whole, and that nations are artificial divisions, you are an internationalist.

A good example of patriotism at its best might be the football World Cup, where, every four years, people come from 32 countries around the world to support teams which embody their national identity. They dress in national colours, wave flags, and sing national songs. They cheer on their nations to beat other nations. They enjoy being part of a national group, and often this effect spills back home, lifting a whole country in celebration of their team's achievements. There might be the odd late tackle, but no one gets killed. In some ways, it's ridiculous to be overwhelmed by emotion just because eleven men or women who happened to be born in the same general geographical area as you manage to kick a ball into a net a few times. But then we are emotional creatures; we need emotion. We also need a sense of belonging, and patriotism can give us that.

Nationalism at its worst brings exclusion, racism, war. The mass slaughter of the First and Second World Wars, and the horror of the holocaust, were born of nationalism: the need to dominate and control other nations, and to exclude those who are not part of the nation because of their race. In a less extreme form, nationalism was behind the harsh treatment of immigrants by the Trump administration in the US and by some governments in Eastern Europe. People tend to turn to nationalism when they feel abandoned, forgotten or overlooked.

Internationalism is most clearly embodied in institutions like the European Union and the United Nations, where nations come together to share resources and solve problems together. These institutions exemplify the idealism of internationalism, but also its limitations. They can be unwieldy and slow moving, and are at risk of being captured by their most powerful members. However, at least they are trying, reminding us of our common humanity.


So are nations good or bad? Like so many other things, it depends what you do with them.