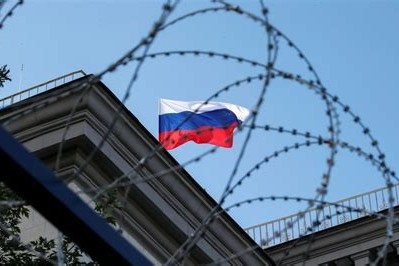 Sanctions and boycotts are in the news at the moment (March 2022). Following the invasion of Ukraine on February 24th, 2022, governments and companies around the world have taken action against Russia and against individuals connected to the Russian President, Vladimir Putin. For governments, this ranges from excluding Russia from financial and banking systems to the cancellation of sporting and cultural events, while almost every foreign company has ceased to trade with or in Russia. Russians now have to get by without Big Macs, flat pack furniture and the latest Apple phone; they can no longer cheer on their national football team, or sing along with the Russian entry to the Eurovision Song Contest. Chelsea fans are wondering if their team will make it to the end of the season now that sanctions imposed on their owner, Roman Abramovich, mean that the club can no longer sell match tickets, merchandise, or players. More seriously, the Russian economy may be on the verge of collapse, with disastrous consequences for millions of people.

That the invasion of Ukraine is a monstrous injustice is beyond debate; the use of sanctions (government led actions against a country) and boycotts (actions taken by companies or individuals, usually to refuse to trade with a country and / or buy its goods or services) to express disapproval of a country's policy or actions is, however, very much up for debate. Sanctions and boycotts raise two key questions:

Sanctions and boycotts could aptly be described as a kind of 'soft war'. They are a way of attacking a country without actually physically attacking it. This means no soldiers' lives in either the sanctioning or the sanctioned country are put at risk. They can express strong disapproval and inflict significant damage while stopping short of escalating a dispute to a full scale war. This is particularly significant in the Ukraine situation. Any form of military intervention in the conflict by any NATO country would mean that the US and the majority of European countries would be at war with Russia, a nuclear armed power. So sanctions can punish bad behaviour without putting lives at risk; this seems a fair thing to do.

However, it is not quite true that sanctions don't kill anyone. UNICEF estimates that half a million Iraqi children died as a result of sanctions imposed on Iraq between the invasion of Kuwait in 1990 and the fall of Saddam Hussein in 2003. Even if sanctions do not directly cause death, they can cause great suffering to people who are likely already to be suffering under a dictatorial regime. Moreover, they rarely impact on the people who are responsible for the behaviour that led to their imposition. Saddam Hussein and his coterie were able to make sure their wealth was not touched by sanctions, and it is very likely that Putin and his cronies will find a way to do the same. Is it right for ordinary Russians to see their jobs disappear, their businesses collapse and their savings vanish while oligarchs and securocrats just have to do without access to their yachts and private jets for a while?

Then again, if we consider sanctions as 'soft war', they are at least better than 'hard war'. The same arguments about innocent people being caught in the crossfire apply to any kind of war. The family of an 18 year old Russian conscript killed in fighting in Ukraine will suffer greatly from his loss, which will affect Vladimir Putin not at all. However, only the most uncompromising pacifist would deny the Ukrainian people the right to defend themselves. The harm done by sanctions to ordinary people can be defended as another, less serious, example of collateral damage that is regrettable but necessary in the pursuit of a higher good.

It is possible to dismiss sanctions and boycotts as little more than 'virtue signalling', a way of making it look like you're doing something without making either a sacrifice or a difference. Are they actually more about making us feel good about ourselves? Do celebrities wearing blue and yellow lapel badges at the BAFTAs turn back any Russian tanks? However, gestures can be as powerful as actions, by providing moral support, strengthening someone's resolve in their struggle. Sending a recently bereaved person a condolences card will not bring their loved one back to life, but it will be a tangible sign to them that they are not alone in their grief, bringing them valuable strength and comfort. Sanctions may bring the Ukrainian people a similar level of psychological support.

One way in which sanctions are supposed to work is by weakening the authority of the government sanctioned over its people. The hope is that the suffering caused by sanctions will cause people to turn against the government that has brought this suffering on them. A problem with this argument is that countries subjected to sanctions are likely to be dictatorships, well schooled in ruthlessly suppressing any signs of discontent with their rule. Moreover, shared suffering tends to unite people against whoever has brought it about, making them forget their reservations about their leaders. The introduction of rationing in the UK during the Second World War did not lead to angry crowds massing in Downing Street demanding the replacement of Winston Churchill with a Nazi gauleiter so they could have a few more sausages for their tea; if anything, it united the British people against the German enemy, and prompted even Churchill's enemies to bury their differences with him for a while.

The history of sanctions is mixed. It took the American and British armies to remove Saddam Hussein from power in Iraq, even after 13 years of sanctions. Iran and North Korea are both heavily sanctioned, but their governments remain securely in power. On the other hand, the cultural, sporting and economic isolation imposed on South Africa was a very significant factor in its peaceful abandonment of the racist regime of apartheid. I remember being rather cynical in the 1980s about the idea that refusing to put South African oranges in your supermarket basket could bring down a government. Then, after the fall of apartheid, I visited Robben Island, where Nelson Mandela was held prisoner for many years. Our guide was an ex-prisoner. He thanked the assembled tourists for freeing him. What he meant was that the many small actions taken by millions of people around the world to isolate apartheid South Africa cumulatively brought about the rectification of that injustice. One individual's actions are unlikely to change the world; enough individuals all taking the same action can. Boycotts may work like this.