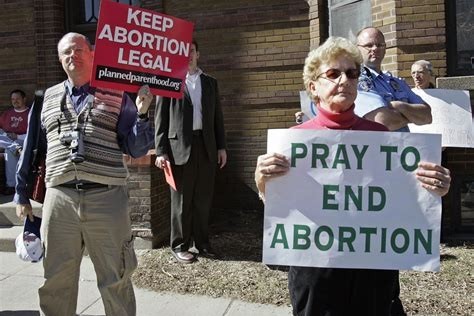 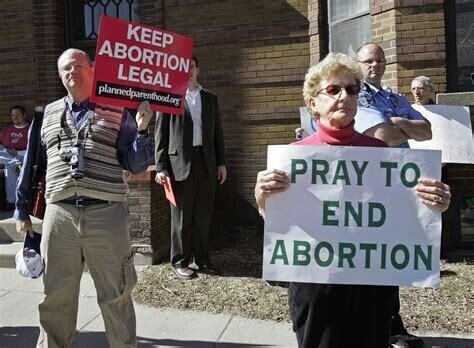 Abortion is in the news at the moment (May 2022), following the leak of a draft opinion from the US Supreme Court which seems to suggest that the court is on the brink of overturning the landmark Roe vs Wade ruling, which effectively legalised abortion across the US in 1973. If this new ruling goes through, it is expected that up to half the states in the US would very quickly make abortion illegal. It is already virtually illegal in several US states.

Abortion is an enormously divisive issue in the US, and a very emotive issue wherever it is discussed. This is hardly surprising, as it deals with issues of life and death, and probes intimately into what a woman may or may not do with her body. For pro-abortion campaigners, any restriction on abortion is an wholly unjustifiable infringement on a woman's right to do what she chooses with her body; for anti-abortion campaigners, abortion is murder of a defenceless being. Little wonder temperatures are so high on both sides. So it's a good idea for debaters (and everyone else) to take a step back and look at the issues in as dispassionate a way as possible, and to ask that useful debating question:

What is the point of clash?

For such a heated and complex issue, the point of clash is in fact remarkably simple: is the foetus a person?

If the answer is yes, then an abortion, however unwanted, difficult or dangerous the pregnancy, is killing a person. Given that that person is utterly defenceless and incapable of agency, that killing can only be regarded as murder. Once you grasp this concept, you can see why some people are so vehemently against abortion. It's no good telling them that a certain woman should be allowed an abortion because she already has five children and can't afford to feed a sixth. Their response would be that, no matter how poor or desperate she is, you would never allow her to kill one of her living children; so why should she be allowed to kill a living child inside her?

If, however, you believe that the foetus is a part of the woman's body, but not yet a person in its own right, then there is no reason why the law should be involved in telling a woman what she should do with her body. An individual woman may have many personal, ethical and medical reasons to consider when she makes a decision about an abortion, but they are a matter for her and her doctor, not for the state.

To put it even more simply: does an abortion concern one person, or two? Once you know the answer to this question, you know where you stand on abortion.

These two positions look irreconcilable. To say (as some politicians who identify as Catholic but are pro-abortion rights, such as Joe Biden and Tony Blair, have said) that, while they personally are against abortion, they don't think that their beliefs should be imposed on others, does not make sense. If abortion really is murder, deciding whether to have one or not is not a matter of individual choice like choosing whether to go to church or not; it should be against the law. If it isn't murder, there can be no justification for the state intervening at all, except in the prioritisation of medical care. Understanding this point can help people on both sides to understand people on the other side more clearly (and perhaps more charitably). It reveals that pro-abortionists are not, in their eyes, 'baby-killers'; and that anti-abortionists are not necessarily motivated by a desire to control and oppress women.

There is, however, some room for more nuanced discussions about how abortion should be regulated.

Currently, the grounds for authorising an abortion in the UK are:


The clause about 'mental health' means that many - probably most - abortions take place because of the social or psychological circumstances of the woman or her family rather than her physical health.

Some would argue for stricter restrictions, e.g. making the term limit shorter, on the grounds that medical care now makes it more feasible for a baby born earlier to survive outside the womb, or only allowing abortion if the physical health of the woman is at risk; others would argue for abortion on demand, without restrictions, on the grounds that it is a decision entirely for a woman to do what she wishes with her body.

There may also be people who are against abortion but do not think it should be made illegal. This is because making something illegal often does not stop it from happening; instead, it just makes it happen in a more dangerous way. Making drugs illegal has not made them disappear; rather, it has made them into a substantial source of income for (often violent) criminal gangs. Before abortion was legalised in the UK in 1967, there were still thousands of illegal abortions every year, but rather than taking place in safe, hygienic medical settings, they were often conducted in dangerous, dirty settings by amateurs. Many women became seriously ill or died as a result. Poorer women, whose well being is likely to be most at risk from an unwanted pregnancy, will always be the least able to access safe abortions in societies where they are illegal, and the most at risk from dangerous illegal abortions. There is a case, on these grounds, for anti-abortionists to say that, while abortion is highly undesirable, and should only be a last resort, it should not be illegal. There is also a case for saying it can (and should) be minimised by more effective sex education and access to contraception.

Making abortion illegal also magnifies existing inequalities. When abortion was illegal in the UK, rich and well connected women could still find a way to terminate their pregnancies safely, while poor women had to take bigger risks with both their health and the law (the 2004 movie Vera Drake, set in London in the 1950s, dramatises the hypocrisy and double standards of that time very powerfully). Ireland has only very recently legalised abortion, but that does not mean that no Irish woman has ever had an abortion. Thousands of them used to travel to England for the operation. Similarly, if some states in the US make abortion illegal, many women will travel to states where it is legal. However, navigating your way round the law in this way requires a high level of income, support and confidence, all assets privileged women have, but women of lower socio-economic status are unlikely to have. Providing abortions free on the NHS minimises these inequalities.

It is important to debate the issues around abortion, as they go to the very heart of what it means to be human. But it is also important to do so in a respectful fashion, which does not demonise those on the other side.