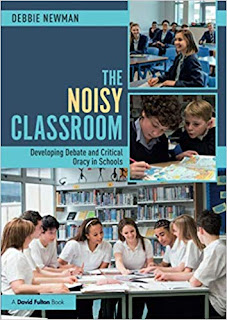 When I began teaching, over thirty years ago, it was considered a badge of honour if people could walk past your classroom during a lesson and think there was no one inside. That has changed for the better. Teachers recognise that students can and should learn by talking, and students value the opportunity to discuss, argue and debate in lessons. Oracy - the ability to speak and listen well - is now considered as important as literacy and numeracy. A noisy classroom can be a productive classroom.

Someone who has done more than most to promote the values and practice of oracy is Debbie Newman, the founder and leader of the excellent consultancy The Noisy Classroom, which runs, among other things, the popular Up for Debate competition. Now she has published a book sharing her ideas for teachers to use in the classroom.

The Noisy Classroom: Developing Debate and Critical Oracy in Schools is packed with practical suggestions for things to do in lessons. These range from formal debates to easy to set up, quick fire activities, all of which will get students engaging in debate and discussion. She shows how debating in the classroom does not have to be restricted to the humanities, but can extend to Science and Maths as well.

She also makes a powerful case for the value of debating in schools and beyond. In answer to the criticism that debating teaches children the kind of dishonest tricks used by unscrupulous politicians, she points out that ‘not listening to their opponents, failing to answer the questions posed to them and asserting arguments without providing evidence or thorough analysis … would have them knocked out of the first round of any debating competition.’ She reminds us of the value of debating in protecting young people from manipulation when she says, ‘Far from equipping tomorrow’s demagogues, giving all students the skills of debating will help to build a more politically literate society whose members are better able to tell a good argument from a bad one’, and she shows how debating can actually build a more united society when she argues, ‘Giving children the ability to argue both sides of the case does not rob them of their principles; rather, it helps them to see that there is usually more than one side to every story.’

This book should be on the shelf of every teacher of every subject, even if they’re not actively involved in debating. If you’re a student, tell your teacher to buy it - it will make your lessons more fun and more productive!
at February 02, 2020