Tricks of the trade #2 - Chiasmus, Dialysis and Enargia 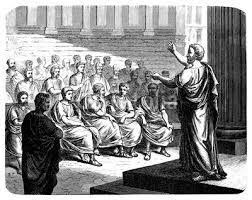 Three more rhetorical devices this week, to add spice to your speeches ...

A more sophisticated form of antithesis, in which you repeat a clause while reversing its terms, making it clear by the contrast, as in antithesis, that your version is better than your opponents’. Probably the most famous example is from President Kennedy’s inauguration speech in 1961: ‘Ask not what your country can do for you, but what you can do for your country.’ So, for example, in a debate on banning homophobic speech, you could say (for the opposition): ‘Let us not seek to protect tolerance through the practice of intolerance; rather, let us fight intolerance through the practice of tolerance.’

This device seeks to show that whatever follows from your opponent’s proposal, it will not be good, by giving two possible outcomes, both of which are bad. For example: ‘If we make homophobic speech illegal, either homophobes will continue to abuse gay people openly, presenting themselves as martyrs for free speech, or they will do so anonymously on social media, with even greater venom; either way, homophobia will thrive.’

This is when you describe a place or situation, either imagined or real, so vividly that the audience can see it. It can be very emotionally powerful. For example, arguing for making homophobic speech illegal: ‘Harry comes home, goes up to his bedroom, and switches on his phone. On it are forty-seven messages, each one insulting him for being gay. He looks out of the window. He can see his brother playing football in the garden with a gang of other boys. He can hear his sister in the next room laughing on the phone to her best friend. They have friends, they are happy, but everyone hates Harry, because he is gay. Tears come into his eyes. He picks up his old, battered teddy bear, whose ear is nearly falling off, and clutches it to him for comfort. The phone beeps. He knows it will be another abusive message, but still he reaches for the phone, his hand shaking …’