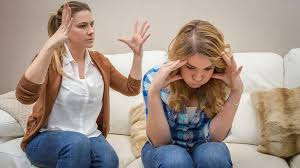 Have you ever had an argument like that? Yes, I thought so. As the parent of a teenager, I’ve had it myself a few times.

It’s a useful exercise sometimes to analyse the arguments you have in daily life in terms of logical fallacies (though probably not a good idea to do this while you’re actually having them, if you don’t want to annoy the other person even more than you already have).

Let’s look at this argument. At first, it progresses through argument and rebuttal, Dad putting arguments, Hannah rebutting them. If I was Dad’s debate coach, I would suggest that, while his arguments are both strong and varied, he gives up rather too easily, moving on to a new argument every time he meets rebuttal rather than responding to the rebuttal with a reinforcement of the argument. But it’s hard to remember these things when you’ve had a bad day at work, you’re tired, and the dishwasher has broken down again.

Dad’s last argument, though, is much weaker, because he essentially gives no reasons for Hannah tidying up her bedroom other than his own position of authority in the family. While it is sometimes necessary for everybody’s well-being in a family, a school or wider society for a parent, teacher or police officer to exert their authority without having to explain themselves, this kind of argument - the argument by authority - will not win you any points in a debate. The argument by authority is similar to the argument by democratic majority, in that it reaches for something or someone outside the terms of the argument to close down the debate.

How might it be used in a debate, and how could you rebut it?

In a debate on the motion ‘This house would ban private schools’, an opposition speaker says:

’It would be wrong to ban private schools because the United Nations Declaration of Human Rights says that parents have the right to decide how their children should be educated.’

How should you rebut this example of argument by authority?

‘Why should we listen to what the UN says? They’re under the control of corrupt leaders in the US and Russia.’

Bad rebuttal. Why? You’re guilty of the ad hominem, playing the player not the ball. Don’t attack the authority; attack what it says. You can do this even while respecting the authority. So, try this instead:

‘The framers of that declaration had the most admirable intentions, and it has been an inspiration for many vital campaigns. However, they did not foresee the way in which the right for parents to choose their children’s education can be abused in countries where private education gives children whose parents who can afford it an unfair advantage. Having the right to educate your son at Eton is a meaningless right for the vast majority of British people, when it costs £40,000 a year and the median household income is £28,000.’

To sum up:
If your opponent cites an authority at you, no matter how admirable the authority: