Guest Post #2 - Should the West pay reparations for slavery? 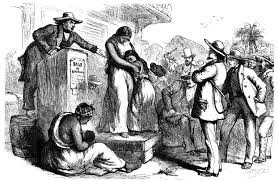 This week we have a guest post from a Year 8 student at Godolphin and Latymer School, Antara Martins, about a recent debate she attended held by Intelligence Squared.
Intelligence Squared present an exciting programme of public debates featuring high profile speakers. They also run debating workshops for students. Both are highly recommended!

I recently attended a debate held by Intelligence Squared with the motion ‘The West should pay reparations for slavery'. It was a topic that provoked heated and passionate debate on both sides.

The speakers for the motion were: Kehinde Andrews, Professor of Black Studies at Birmingham City University and Esther Stanford-Xosei, a reparations activist and co-vice chair of the Pan-Afrikan Reparations Coalition in Europe. Opposing the motion were Katharine Birbalsingh, Headmistress and co-founder of Michaela Community School in London and Tony Sewell, Educational consultant and CEO of the charity Generating Genius, which helps young people from disadvantaged backgrounds to study science and technology at top universities. What I found most interesting was the fact that all debaters for and against the motion were descendants of slaves.

The proposition stated that almost 12 million Africans were enslaved during the transatlantic slave trade and suffered inhumane cruelty; yet the only people to be compensated when slavery was abolished were slave owners and traders. The government’s justification was that slave owners had lost their business and it was only right to make up their lost earnings. In addition, until four years ago, British taxpayers were still paying off government pledged debt in 1833 of £20 million (40% of its national budget) in order to reimburse the owners of slaves when slavery was abolished. The sum was monstrous in 1833, equivalent to £17 billion today and it took the British taxpayer 182 years to pay off.

Another point put forward by the proposition was that the UK and US gained much out of slavery.  The Industrial Revolution would not have been possible without the wealth generated by slave labour. Britain’s major ports, cities and canals were built on invested slave money. Several banks can trace their origins to the financing of the slave trade. In the US even the Capitol and The White House were built by slaves. Capitalism itself is born out of slavery.

To conclude, the proposition emphasised that the repercussions of the slave trade remain even over a hundred years after its abolition. The lack of compensation paid to slaves and the philosophy of the Enlightenment thinkers who put whites at the top and blacks at the bottom of society created economic disparity, racism, discrimination and limited access to education and jobs for descendants of slaves.

The opposition’s Tony Sewell wanted to take a more positive approach by citing that Africa is a strong and growing economy and the African people should not rely on handouts from the West to make them succeed; instead the West should make investments in Africa that can further improve the economy. They gave the example of how China invested in Africa. This was very well rebutted by the proposition speaker Kehinde Andrews, who mentioned that investing does more good for the Chinese people than the African people.

Katherine Birbalsingh questioned the practicality of the motion stating that it would be impractical to pay reparations. It would be impossibly complicated to calculate the exact amount of compensation, or to work out to whom the compensation is owed, and in what proportion. Once again, the proposition quickly pointed out that if it was possible to calculate what we owed to the slave owners then surely it would be possible to do so for the slaves who worked without payment.

The opposition’s closing argument stated that these slaves are no longer with us and slavery was an event that occurred over a hundred years ago. Whilst they were in agreement that slavery was cruel and brutal, they suggested that instead of focusing on the past, we could take steps to prevent it in the future and also tackle racism in the present day. The proposition  quoted Malcolm X in response:  “If you stick a knife in my back nine inches and pull it out six inches, that's not progress. If you pull it all the way out that's not progress. Progress is healing the wound that the blow made. "

The proposition won by a small margin. It has been 154 years since slavery was abolished; yet still the wounds run deep. I am surprised by the lack of dialogue on this subject, and by the fact that people who are happy to inherit their ancestors' land and property do not want to know how it was acquired.