How to set up a debating club in your school 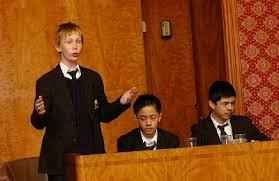 So, you want to set up a debating club at your school.

If you want to set up a cricket club, you need:

If you want to stage a musical you need:

If you want to set up a rowing club you need:

If you want to set up a debating club you need:

See what I mean?

One of the great strengths of debating is that it requires very few resources to run; debating is, as it were, a cheap date. The one resource it does require, however, is teachers' time which, as anyone who has ever worked in a school knows, is by far the most scarce resource. (A friend of mine recently retrained in mid life as an English teacher after years as a freelance journalist and composer. I asked him what the most important thing was he'd learnt in his first year. 'How to make a cup of tea faster,' he said.)

I hope you believe that it is worth investing that time in debating. You should be able to ask for (and count on) support from senior leadership, perhaps even in granting you extra time. Debating is an increasingly valued activity in schools. It has always been popular in the independent sector; a very welcome development in recent years has been its growth in the maintained sector. It aligns very well with the mandatory promotion in schools of British Values, particularly democracy and respect for the beliefs of others.

So, how to run your debating club?

Have an initial meeting where you test the level of interest, so that you can scope what you can offer. Ideally, you should have different clubs for different age levels. As a minimum, you should have one for Years 7 - 9 and one for Years 10 - 13; if you have capacity for more divisions, even better! Of course, this means more investment of precious staff time. If you can, recruit a colleague to run one of the clubs.

Alternatively (and in many ways better), delegate the running of the Year 7 - 9 club to one or more Year 12 or 13 students. In my own school, I have for many years had a formal role of 'Debating Captains',  a team of Year 12 and 13 students appointed to train younger students, along with other duties. In my experience, older students are flattered and highly motivated by being given this responsibility, which gives them valuable leadership experience (and looks great on UCAS ...). I have also found that older students are far more effective role models than teachers; when I am interviewing applicants to be Debating Captain and ask them how they came to be interested in debating, they invariably mention the inspirational impact of the Year 12 or 13 student who mentored them when they were younger.

Then, you need to book a room and a time. Make sure you have a regular time and venue that can be identified with debating. The lunch break is the traditional time for extra-curricular activities. It does ensure that students are all on site, though the time can also be quite pinched; you will be lucky to get more than half an hour. Scheduling the club for after school will give you more time, though may also make it harder to get students to stay. Some schools have particular periods of the week ring fenced for extension / enrichment activities, and you may be able to bag one of these slots. Whenever you schedule it, make sure it happens every week; once you lose the momentum, it can be hard to regain. Be prepared for a certain amount of horse trading in the staff room over clashes with sports, music and drama. As in any negotiation (particularly with people you have to see every day), you need to be willing to make some compromises; however, don't be afraid to stand your ground when you think it is important.

What to do in that time?

I would suggest alternating instruction and practice. You do need to do some instruction. No matter how keen they are, students are not going to just know how to do debating (it is not simply a matter of having an argument) and they need to be taken through both the rules and the skills and techniques. You can use some of the posts on this blog, particularly the 'How To ...' posts, and develop your own ways of teaching the techniques covered in them.

Students are highly motivated by competition, and it gives them much more investment in the activity. If the club runs at lunchtime, the best format for a competition is likely to be Mace (if you're not familiar with Mace, I will be covering how it works in a later post). If necessary, use shorter speeches than the traditional seven minutes, say five or even three minutes, with two minutes for summary, to save time. If you have a whole hour, for example with an after school slot, British Parliamentary can work well, though students do need to be quite confident to tackle this more demanding format. For either of these formats, you will need teams of two. Get students to choose their own teams (unless there are particularly difficult social dynamics in the group); they will work better with people they have chosen.

Set up a ‘leader board’, with teams ranked according to their performance over the year: two points for a win, one for a tie; if they tie on points, position determined by total number of speaker points. Set up a page for the club on Google Classroom (or whichever social media your school uses) and post the leader board on it, along with teaching materials and reminders about meetings. The advantage of the leader board system is that it is dynamic and constantly shifting. Teams have something invested in it until the end of the season, and are motivated to act on the feedback you give them and improve. To ensure a fair outcome, have a fixed number of debates scheduled for the year, with each team having the same number of debates (ideally each team debating against each other team at least once) and then award a trophy to the team which is top of the leader board at the end of the season.

Use the school’s reward system - commendations, merits, house points, whatever you have - to recognise the contribution and commitment of debaters. If your school has a ‘colours’ system for recognising achievement in sport, negotiate to have it extended to debating.

Some schools focus exclusively on an elite half dozen debaters, drilling them ruthlessly to win competitions and fill the trophy cabinet with silverware. That has never been my approach; while debating is a competitive activity, and should be approached competitively, I believe in inclusivity, and measure success by the number of students taking part.

That said, it is often the case that debating clubs tend to attract the more ambitious students, often in the gifted and talented stream. The debating club can be an invaluable way for such students to meet and make friends with like minded students. In some cases, if they are in a school, or a social group within the school, where it isn’t cool to be clever, the club can provide a kind of refuge. If your school is one where sporting success is highly valued, debating can provide students who do not enjoy sport an opportunity to shine at a competitive activity.

Do whatever you can to build an espirit de corps in the club. Organise a cake rota for meetings. Get hoodies or T shirts printed, with a debating club logo. Have a club outing to the local pizza restaurant at the end of the year.

If you can, take the competition outside the club to the wider school. Work within the school’s existing structures as far as possible. Many schools have a house system, which is used for sports, drama and music competitions. Add debating to the list of competitions, preferably with a competition for each age group. This will greatly increase the interest in and visibility of debating. House leaders and members of the house will encourage students to take part, and will turn up to debates to support their house.

If your school doesn’t have a house system, or similar pastoral divisions, encourage a wide range of students to enter a school wide competition as self-chosen teams. Work towards a high profile final for each competition. Ideally, run a leader board system (see above) in order to sustain interest throughout the year, and stage the final between the top two teams. If you don’t have time for this, run a ‘knock-out’ system. In this system, teams are drawn at random to compete against each other in rounds. After each round, the losing teams are eliminated, reducing the number of teams by half. Then another round is set up and run, eliminating another half of the teams, and so on until you have just two teams left, who compete in the final, the winning team being awarded the trophy.

Keep as high a profile as you can for debating within your school. If you can negotiate it, have a whole year group, or even Key Stage, off timetable to watch the debating finals. Invest in trophies for all the competitions, and get winners’ names engraved on them. Have them presented in Assembly. Take photos and post them in your school newsletter, on the school website, on the school social media feed, even in the local press. Senior leadership will appreciate the raising of the school’s profile in this way, and will be minded to support debating more.

One of the best ways of all to motivate students is to involve them in external competitions against other schools. I'll be covering what competitions are available in a later post. For now, though, in this fresh, clean, hopeful first week of September, get started with debating ...
at September 01, 2019