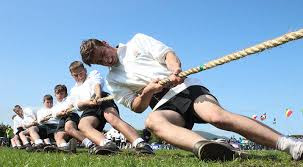 This week we’re going to look at our first Big Idea. Big Ideas are the fundamental issues which lie deep below debate motions. If you can understand what Big Ideas are and how they work, you will see the motion in a new way, and you will also be able to take control of the debate and steer it in a way that favours your side. Big Ideas are particularly important in defining the motion and identifying the point of clash.

Our first Big Idea is Freedom vs Security. These are two opposite values, at opposite ends of a line. Think of them as being like two teams at different ends of a tug of war. Sometimes the rope pulls one way; sometimes it pulls the other. Your job as a debater is to decide which end of the rope your side of the motion lies on, and to keep pulling in that direction.

What is the difference between Freedom and Security?

If you value Freedom above all, you think people should be allowed to make their own choices, but should also accept the consequences of those choices. You accept that there is a risk in this approach. People might make bad choices, which might damage them, and might also damage others, but you believe that this is a risk worth taking, because it is more important to be free than to be safe. You might also argue that freedom works better than security, because people tend to make better choices when they have ownership of those choices and the consequences.

If you value Security above all, you think people’s choices should be regulated to protect them and others. You accept that this means sacrificing some freedom, but you believe that this is a worthwhile sacrifice in order to protect individuals and society at large. You are likely to believe that security works better than freedom, because too much freedom tends to lead to chaos and injustice, with the strong ruling over the weak.

How can you apply this Big Idea to analysing a motion?

The first thing to say is that not all Big Ideas apply to all motions. The Freedom vs Security Big Idea applies best to motions which are about whether people’s behaviour should be controlled or not.

Here are some motions it works well with, and how to apply it:

1. This house would legalise drugs

2. This house would ban hate speech

3. This house would impose a 20 mph limit in cities.

You get the picture. Once you start seeing motions through the lens of a Big Idea, you can analyse them much more effectively and create better arguments.

You should also keep Big Ideas in mind throughout the debate, by constantly pulling the rope of the discussion back towards your end of the clash. If you’re on the side of Freedom, keep attacking the other side for being restrictive and for closing down options, while talking up all the liberating possibilities Freedom will bring. If you’re on the side of Security, keep reminding the audience of the dangers the other side’s proposals will bring, while talking up the safety and efficiency of your side.