Factsheet #2 - how to impeach a president 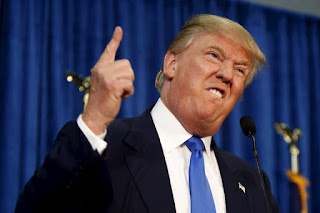 It’s not controversial to say that Donald Trump is controversial. He has friends; he has enemies. A lot of people would like to see him gone from the White House. But there are only three ways to remove a President of the United States between elections: death, resignation and impeachment. The pros and cons of impeaching Mr Trump have been much debated lately, and will be debated again soon after Half Term in the final round of the London Junior Debating League.
What does ‘impeachment’ actually mean? Pelting him with rotten fruit? In our guest post this week, Neil Singh and Tucker Wilke, students from Hackley School, New York, explain the technicalities behind impeachment - essential to know if you are debating whether or not it is a good idea.
Our thanks to Neil and Tucker for this post. We are looking forward to welcoming students from Hackley to London for their debate tour in the last week of March (Brexit week … will they get home?)
The American Constitution gives three reasons why a President, or any other official, can be impeached. The first is treason, which is helping an enemy while working against one’s own country. Treason usually consists of either starting a war against the United States, or giving aid and support to its enemies. The second reason listed for impeachment is bribery, which means taking money or gifts in exchange for a political favour. The third reason for impeachment is also the most broad: “high crimes and misdemeanours.” Over time, most calls for impeachment have fallen into this category. Critically, there is no specific definition of what constitutes “high crimes and misdemeanours.” It is essentially whatever the legislative branch of government decides it is.