What can a novel have to do with debating? 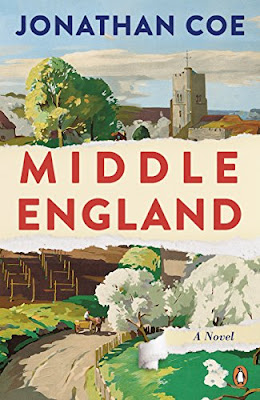 More than you might think. The best sort of novels contain debates, even are debates, as different characters and different groups of people present different points of view and different responses to what is happening in the world. As in a debate, the reader watches and listens, and can make up her own mind about what she thinks.

Middle England, by Jonathan Coe, is that sort of novel. Opening in 2010 and ending in September 2018, it spans the last eight years from the point of view of Benjamin Trotter, a fifty something man from Birmingham, and his family and friends. As well as presenting their ups and downs and ins and outs, the novel debates all the major issues of the last few years in Britain: identity politics; anxieties about immigration; the effects of austerity; the divide between the generations; the divide between London and the rest of England; and above all, looming over it all, Brexit. By the end of it, you will have a much clearer understanding of the deep causes of Brexit, as Coe makes it clear that it is about much more than the European Union, and is rather a symptom of a profound malaise in British society. Apart from anything else, the novel reminds us Londoners that (there’s a clue in the title) there is life outside the M25; and that this should come as news is part of the problem.

All this makes it sound like a rather earnest read. But in fact it is extremely funny, laugh out loud in places. Two children’s clowns pick a fight in a garden centre; a speed awareness course is an unlikely setting for romance; a young couple on a luxury cruise find their dinner table steadily emptying night after night as their elderly companions die off; a middle aged couple, trying to recreate their teenage romance, have an embarrassing encounter in a wardrobe. Benjamin Trotter is one of my favourite characters in fiction: sweet, romantic, hopelessly naive but very endearing.

Middle England is an entertaining and enlightening read for Christmas. It will make you laugh, and it will make you understand Britain much better. Britain certainly needs some understanding friends right now.
at December 11, 2018 No comments:

This week we have our first guest post, from Avni Sharma, a student at Godolphin and Latymer School.

Many thanks to Avni - other guest posts, from anywhere in the world, are very welcome! Contact me on jbell@godolphinandlatymer.com.

Things that I learnt from the ESU debating workshop:

1. Points of information are used throughout debating to point out flaws in the argument of the opposing side. Although I knew that they were a valuable tool which could be used to make my own argument stronger, I didn’t know just how important they are in a debate. When used effectively, points of information can shape your argument. We were told that it is therefore a good idea to write them down before making them. This makes them clearer in your head and results in them being more concise and direct when you say them out loud.

2. We were also taught about valuable tactics to use when defining the motion of a debate. It is important that the definition of the given motion is clear and sufficiently detailed to set the groundwork of your argument. I asked our trainer about what would be considered ‘squirrelling’ the motion (when you define the motion so that it is extremely easy for your side to defend, creating an unfair advantage). We learnt about how it is fine to set certain limitations on the motion, as long as you do not change the premise of the debate. This helped us be less wary of setting reasonable limitations on the motion which work in our favour.

3. We were shown how to create effective rebuttal in response to the other side’s argument. We were told that our rebuttal should attack the opposing side’s strongest arguments to make them seem as weak as possible. This type of rebuttal should be prioritised over other rebuttal if you are running short of time (rebuttal should take you no longer than 1-1.5 mins in a 5 min speech).

4. It was also interesting to learn that in British Parliamentary debating judges award many more marks for your content than for your style when speaking. We were told that although this did not mean that you should let the level at which you are presenting your arguments to drop, you should aim to have 2-3 really detailed, well developed points so that you can earn as many content marks as possible.

5. Lastly, we learnt that the summary speaker should only summarise their side’s points briefly. Although it is important to reiterate your partners’ points, this should not become the focus of your speech. We were told that it is much more important to identify the points of clash and to show why your side won them. I learnt that by doing this, I would be able to make a more convincing argument to the judges about why my side won the debate.
at December 06, 2018 No comments: